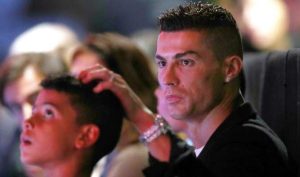 Dolores Aveiro has made it clear that if Ronaldo fails to sign with Sporting CP before retirement, h

son  Ronaldo Jr will definitely do so.

Aveiro is a huge Sporting fan who claims her wish before death,

is seeing a family member wear the green and white stripes once again.

She would be unfazed if it was Cristianinho, 11, was the person to fulfil her dream.

As she thinks the boy is better than his father was at his current age.

“Ronaldo has to come back here [to Sporting], for me he’d be here.”

“He likes to watch Sporting’s games. I’ve already told him: ‘Son, before I die I want to see you return to Sporting’.

At the time, Ronaldo didn’t have a coach, but today Ronaldo is his son’s teacher.”

It’s been quite some time since Aveiro got to see her son play club football in Portugal.

As Ronaldo left Sporting as a teenager following the 2002-03 campaign to kick off his first stint at Old Trafford.

She wanted a reunion this summer, but her son instead chose a homecoming of a different kind by rejoining Manchester United.