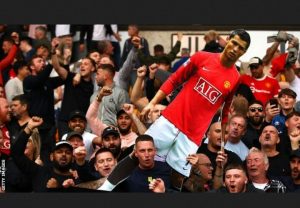 Cristiano Ronaldo says he is “back where I belong” at Manchester United and has dedicated his return to the club to former boss Sir Alex Ferguson.

United have paid an initial 15m euros (£12.85m) to sign the 36-year-old from Juventus, a decade after he left the club to join Real Madrid.

He has signed a two-year contract, with the option to extend for another year.

“Everyone who knows me, knows about my never ending love for Manchester United,” he wrote on Instagram.

“The years I spent in this club were absolutely amazing and the path we’ve,

made together is written in gold letters in the history of this great and amazing institution.

“I can’t even start to explain my feelings right now, as I see my return to Old Trafford announced worldwide.

“It’s like a dream come true, after all the times that I went back to play against Manchester United,

and even as an opponent, to have always felt such love and respect from the supporters in the stands.

“This is absolutely 100% the stuff that dreams are made of!”

Let’s make it happen once again! PS – Sir Alex, this one is for you…”

He is believed to have spoken to Ferguson prior to his return to United,

He is not only a marvellous player, but also a great human being.

“To have the desire and the ability to play at the top level for such a long period requires a very special person.

“I have no doubt that he will continue to impress us all and his experience will be so vital for the younger players in the squad.

“Ronaldo’s return demonstrates the unique appeal of this club and I am absolutely delighted he is coming home to where it all started.”

Ronaldo had been linked with Manchester City but opted to return to United,

two League Cups and one FA Cup – as well as the Fifa Club World Cup and Community Shield.

Ronaldo could be available to Solskjaer for United’s home game against Newcastle United on 11 September,

which is the club’s first match following the international break.

Ronaldo wore the number seven shirt in his first stint at United but that is currently held by Edinson Cavani,

and, even if the Uruguay striker was willing to hand over the shirt number,

Premier League rules prevent a mid-season swap except in the most extreme circumstances.

In numbers: Why Ronaldo is one the world’s best