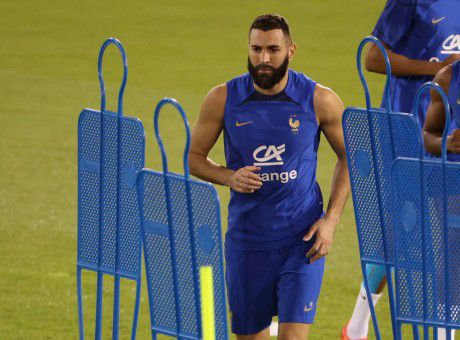 Real Madrid star Karim Benzema has been ruled out of the World Cup due to injury he sustained in training.

RMC reported that the French medical staff were “very concerned” about the Real Madrid forward’s prospects of being fit for the competition as a whole on Saturday evening.

Benzema was forced to withdraw from the session after feeling pain in his thigh during a sprint, however, quickly undergoing scans to determine the extent of the problem.

France have now confirmed Real Madrid striker will have no role to play in Qatar, with the injury set to sideline him for at least three weeks.

‘I am extremely sad for Karim who made this World Cup a major goal.’

‘Despite this new blow for the French team, I have full confidence in my group.

‘We will do everything to meet the huge challenge that awaits us.’

‘He had an MRI scan which unfortunately confirmed a lesion of the thigh muscle, which needs a recovery time of three weeks.’

done so reason tells me to leave my place to someone who can help our group have a good World Cup,’ Benzema wrote.

‘Thank you for all your messages of support.’

Deschamps will have the chance to bring in a replacement for Benzema before Monday.

The 34-year-old will now become the first Ballon d’Or winner since Kevin Keegan in 1978 to miss the tournament.

the competition with Paul Pogba and N’Golo Kante – key figures in their 2018 success in Russia – both ruled out.

In a further blow, Didier Deschamps is also without RB Leipzig star Christophe Nkunku, who suffered an injury during a training session this week following a challenge from Eduardo Camavinga.