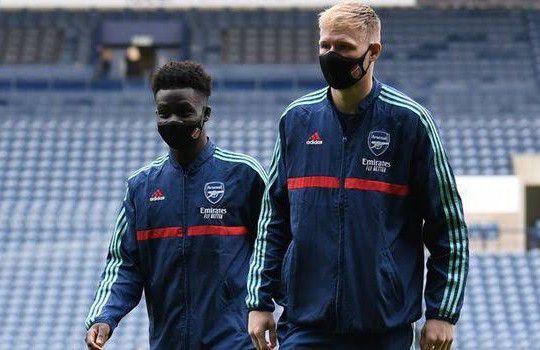 Arsenal boss Mikel Arteta has revealed Bukayo Saka has returned to first-team training, but Aaron Ramsdale has not and is a doubt to face Crystal Palace.

The Gunners travel to Selhurst Park on Monday night as they continue their search for a top-four finish,

but could head into the game having dropped to fifth place if rivals Tottenham beat Newcastle by two or more goals on Sunday.

Prior to the international break, starting goalkeeper Ramsdale picked up a hip injury, while star winger Saka tested positive for Covid-19 after joining up with the England squad.

Arteta was quizzed on the duo’s availability ahead of Monday’s crunch clash.

Read Also::Aaron Ramsdale Reveals He Would Take On Arsenal Captaincy

“[Ramsdale] hasn’t trained yet so we don’t know what he’ll be able to do on Monday.

He wanted to play against Aston Villa [before the international break] but it was a significant injury and he had to take his time and the physios are doing everything they can.”

Meanwhile, Palace boss Patrick Vieira has revealed Wilfried Zaha and Michael Olise could both be fit to face Arsenal despite picking up injuries while on international duty.

Zaha was ruled out of Ivory Coast’s friendly with England with a hamstring problem,

while Olise returned from France Under-21 duty with a foot injury.