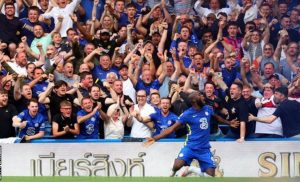 Ex_Inter forward  scored his first ever goals at the stadium .

The Belgian’s clinical finish through Steer’s legs came from a precise pass from Kovacic inside his own half.

Lukaku sealed the win for Chelsea in injury time with a powerful finish down from the edge of the box.

Tuchel’s side up to second – level on points and goal difference with leaders Manchester United,

and sees the club reach a significant milestone as they become only the second team,

in Premier League history to reach 600 wins in the competition (Man Utd have 690).

Read Also: Juventus Are Still Struggling Without Ronaldo As They Surrendered To Napoli.

Lukaku said after the match.

“I was up and down at the start [of my career] but I’ve found a certain consistency,

in the last three years. With experience and hard work, I just keep on working.

“It’s a good start but we have to keep working.

We know this year’s going to be very competitive.

A lot of teams are going to be fighting for the title.”

Lukaku kissed the club badge as he celebrated his opener in front of Blues fans,