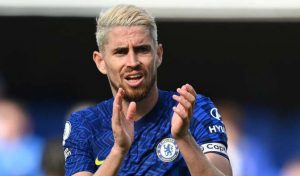 The Italian midfielder reveals what people use to call him that do annoying.

Jorginho has opened up on some of the criticism he received early in his Chelsea career,

revealing that being called “Sarri’s son” made him “so angry.”

Maurizio Sarri brought Jorginho with him from Napoli after he was named Chelsea manager,

hoping the Italy international could run his midfield in London as he had in Naples.

After some early struggles in London, Jorginho had to deal with talk that he was only in the lineup because of his relationship with his head coach.

• Hazard Expressed People’s Feelings Over Him

“My start at Chelsea made me miss [Napoli] even more,” Jorginho wrote in The Players’ Tribune.

“We all remember what they were saying, right? I was too slow. I was too weak. I was Sarri’s son. Man, it made me so angry.

“But listen, they underestimated me. You see, I’ve had a turbulent start at every club,I’ve been with Every club.

It’s incredible. When I came to Verona, nobody wanted me.

They sent me on loan to the fourth division. Nobody wanted me there either.

“But I kept working and I won respect. I went back to Verona and we went up to Serie A.

I had a hard year at Napoli, too, and then Sarri came and changed everything.

“So the Chelsea stuff? Puh! I just used the criticism as fuel.

I was thinking, These people are going to be embarrassed.

So to all the critics, I just want to say one thing.

“Thank you. Really, thank you all.”