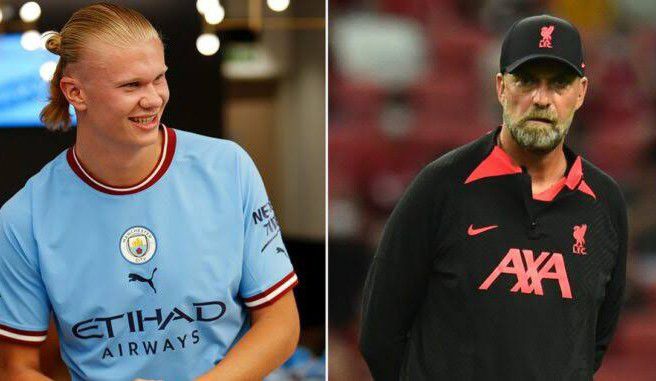 Liverpool Boss Jurgen Klopp has hailed  Erling Haaland as the “best striker in the world” ahead of Sunday’s clash with Manchester City at Anfield.

It’s their first time up against Pep Guardiola’s side with Erling Haaland leading the line, with the striker having scored 15 times in just nine Premier League matches this season.

And Klopp conceded the “sensational” Norwegian would only make life more difficult for his Reds.

“When (Haaland) was very young, you could see the potential, it was insane.”

“Physically he sets new standards, the combination of being really physical and technical and sensational awareness.

His orientation on the pitch is exceptional, he knows always where the decisive gaps are, barely offside.

“Now at City he has some of the best players in the world at setting up goals – De Bruyne, Mahrez, Foden, Bernardo Silva, – so it’s a perfect fit.

“Obviously when you play against somebody at the moment who is the best striker in the world you have to make sure he doesn’t get that many balls.

“That’s what we will try but obviously against City the problem is if you close Haaland down with too many players you open up gaps for all the other world class players.

“So that will not make life easier, it’s a challenge, it’s a football problem and we will try to find a solution.”

Jurgen Klopp also believed that, Haaland or not, City represent the biggest challenge in football.

But he also said he was not thinking about recent results for either side and that all the focus was on Sunday’s fixture.

“When you play City, results left and right [before and after] are not really important

because this game requires all your focus, all the things you know about football.

“I enjoy preparing for the game but it is the biggest challenge you can face in football.

“With City, if you can close them down here, they are there, close down that gap, you open up that gap, so always a challenge.

“But it’s a home game, Anfield, us against Man City, they are at the moment the best team

in the world but we will give it a try, knowing we can get help from a full Anfield and we will try to use that.”