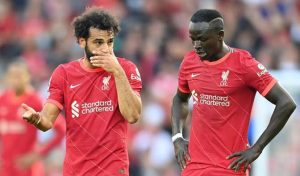 Salah and mane  are set to miss about four weeks while Jurgen Klopp believed they have to deal with it and they  will definitely do.

Liverpool manager  has insisted they will find a solution to deal with the absence,

of his star forwards Mohamed Salah and Sadio Mane in January.

The duo is expected to play in the 2021 Africa Cup of Nations finals to be held in Cameroon,

from January 9 to February 6, 2022. Salah will be representing Egypt while Mane will be turning out for Senegal.

It will be a blow for the Merseyside-based charges who are aiming at offering a stiff challenge in the race for the Premier League title.

Read Also: “I Had The Feeling That He Struggled,” Tuchel Takes Responsibility For Saul Debuts

“We knew it, [Salah and Mane’s absences], we have to deal with it,

and we will deal with it. How? We will see in January,”

“People now say we have to sign two strikers with the same quality of Sadio and Mo.

That cannot be a solution as we cannot do that, so we have to find a solution for that in January.”

On Sunday, the Reds will be away against Leeds United in a league fixture.

In this fixture last season, the score was 1-1 and the German tactician fancies his,

chances of getting a win this time around despite conceding it will not be an easy task.

“We had, with some players now, a week’s time to prepare for it and some only came back training,[from the international assignments],

on Thursday so we have two sessions where we can probably prepare for it,” Klopp continued.

“The game itself is already tricky. We saw in the last two games against them,

my first time playing against Leeds, it was really exciting.

They have a specific way of playing the game with strict man-marking idea defending.

“Against Leeds [it’s] high intensity, they go for it.

It’s a really good team and we have to be at our best to get something there.

“They don’t have the points yet they want to have.

But, they for sure think they have a good chance against us. But they haven’t played us yet this season.

“We are hopefully good, as good as we can, and then we are difficult to play.

When we are difficult to play, we have a chance to win – and that’s what we try.”