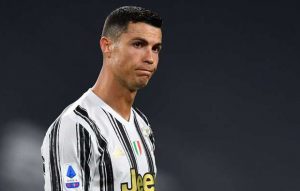 Juventus have bid farewell to Cristiano Ronaldo as they confirmed a €23 million,

(£20m//$27m) deal with Manchester United for the transfer of the attacker.

The 36-year-old has spent three years with the Serie A side and lifted two league titles,

but has opted to head back to Old Trafford amid the Bianconeri’s recent failure to compete for major trophies.

Ronaldo looked to be heading to Manchester City initially, but the Red Devils hidjack  him up and confirmed an agreement on Friday.

All to know about the Transfer

“On 10 July 2018, two icons of the European and football world came together,

Today, after three years together and 133 appearances, 101 goals scored and five trophies won,

that chapter has come to an end. The paths of CR7 and Juventus have gone their separate ways,”

“On that day in July, when Cristiano arrived in Turin, the electric feeling of those great days could be felt through the air.

The Juventus fans welcomed CR7 like a king, eager to see him on the pitch and cheer with him. It was a great story.

in his first three seasons with Juventus, and since his arrival in Serie A,

“Not only that, with the aforementioned title of top scorer,

he also become the first to sit on the throne of the top goalscorers in Serie A, La Liga and the Premier League.

The unforgettable moments experienced together were many.

We could recite them and relive them, but it would not help, because everyone has their own special memory linked to CR7.

Everyone has a shared emotion that does not need to be dusted off, because everyone,

will always remember what they felt in walking this stretch of road together.

“Today that bond born on July 10, three years ago, has been dissolved,

but what has been written will forever remain. It has been an incredible journey.”

to seal the Portugal star’s return to the Premier League, Juventus confirmed.

They will have to pay up to €8m (£7m/$9m) in bonuses “upon achievement of specific performance objectives”.