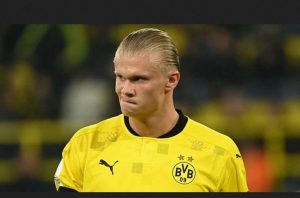 Juventus made an attempt to sign Norwegian striker in 2017,

but allow  him go on to star for Borussia Dortmund.

Federico Cherubini accepts  the club regret not signing Norwegian striker when they had the chance in 2017.

Haalandb was on the books at Molde back then, with his stock beginning to rise on the back of prolific exploits.

Juve were keen, but their efforts to do a deal were knocked back as Haaland waited,

on more suitable options and the 21-year-old is now a global superstar at,

Borussia Dortmund that is being courted by the biggest sides on the planet.

“We do, it would be stupid to say something different.

However, things must be put into context.

“Young players can be scared about going out on loan,

we were at the beginning of our U23 project and perhaps the perspective we offered him wasn’t too exciting.

“Maybe the idea of going out on loan wasn’t ideal for a player like him.

Maybe today, things would be different.”