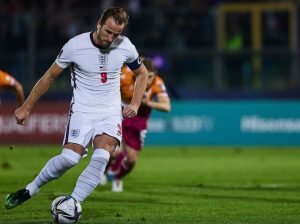 Kane hit FOUR goals in the first half to surpass George Hilsdon’s tally in 1908 and Dixie Dean’s record in 1927 of 12 strikes to become the highest scoring Three Lions player from the 12-month span of January to December.

The 28-year-old remarkably made it seven goals in two appearances during the international break.

That made him  joined Gary Lineker in joint-third in the all-time scoring charts for England with 48 goals.

Harry Maguire gave the hosts the lead after just five minutes with his second in as many games before an own goal put the visitors in control.

Kane then struck from the spot following a mindless handball, before the striker got his second after slotting home tidily shortly after.

He then netted another penalty before superbly dancing round a San Marino defender for his fourth before the interval.

And with his goals, Kane became the first player to score four in a first half since Ian Wright in 1993.

Shortly after the hour mark, Kane was withdrawn with the scoreline at 7-0.

He is now just five goals behind Rooney in the all-time scoring charts and may well break the record by the time the World Cup comes around next year.