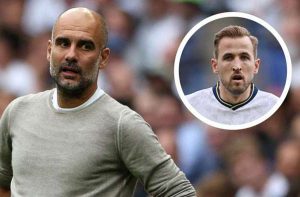 Manchester City boss is refusing to be drawn on whether a move will be made for a prolific Spur striker, but he is always looking for more talent.

Pep Guardiola admits that Manchester City have an “obligation” to spend on top talent,

but the Blues boss is still refusing to be drawn on whether or not he will move for Tottenham striker Harry Kane before the summer transfer window closes.

The reigning Premier League champions find themselves short of a prolific No.9,

An approach for Kane is said to have been in the pipeline for a while, amid rumours of City breaking the British transfer record again with another £100 million-plus ($136m) deal,

but Guardiola continues to talk around the subject ahead of an August 31 deadline.

“When we decided to not sign a contract for Aguero and people say what we’re going to do, I said many times: it’ll depend on the market, the options.

“Maybe we buy or maybe we’ll not.

“We still have 10 days in the transfer market, we’re going to see what happens, and it depends on that, what decision we are going to take.

“If the team is the same one, I said before the 5-0 I’m more than pleased with the team.

“We put in incredible energy this week to realise that we still want to be there,

What next for Man City?

City have already invested heavily in Jack Grealish – who opened his goal account for the club on his home debut against Norwich,

but, could acquire another proven England international in the form of Kane.

While Guardiola is giving little away when it comes to his plans there,

the Catalan coach does admit that the big-spending Blues always need to be in the market for the best talent available.

He added: “The group of people are fantastic, the players have incredible quality, so I cannot complain.

“I’ve never complained since I arrived day one, I will not do it now, but of course the club has an obligation,

the duty to look forward, to get better, to feel we can still be there with a tough Premier League and this is what we are going to do.”

City will be back in action on Saturday when playing host to pointless and injury-ravaged Arsenal.