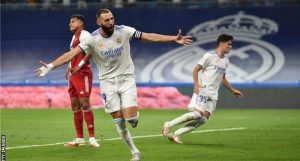 The French star scored either side of a Franco Cervi strike after Santi Mina had given the visitors the lead on four minutes.

Benzema sealed his hat-trick with an 87th-minute goal as Carlo Ancelotti’s side moved top of La Liga.

Despite ongoing construction work, 30,000 supporters were welcomed back to the Bernabeu.

As Los Blanco played their first match there since beating Barcelona in El Clasico on 1 March 2020.

The victory moves Real to the top of the table on goals scored.

They are  on same points with Valencia and Atletico Madrid.