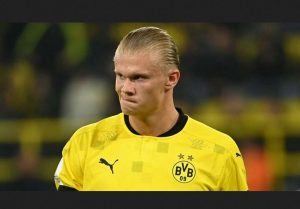 CEO Hans-Joachim Watzke reveals to keep the prolific Norwegian star will be tough – but not impossible.

Dortmund are aware retaining the services of a prized asset is going to be tough.

And, Watzke says there is no guarantee the 21-year-old will be lured to pastures new.

The Dortmund chief revealed to Welt am Sonntag of Haaland and the chances of keeping him at Signal Iduna Park:

Read Also: All Eyes On Messi As He Was Replaced In His Home Debut For Paris St-Germain

“Of course it will be difficult. I am not saying, however, that it is completely out of the question.

We’ll do everything we can to keep our top players loyal to us in the future.”

Haaland was with a brace  in his latest outing for Dortmund,  in the 4-2 victory over Union Berlin.

He now has 68 efforts to his name in just 67 appearances for the club.

Watzke believes that they can strike gold again if forced back into the market,

for another goal-getter, saying:

“We have to have the self-confidence to say we’ll find a new top striker again.”