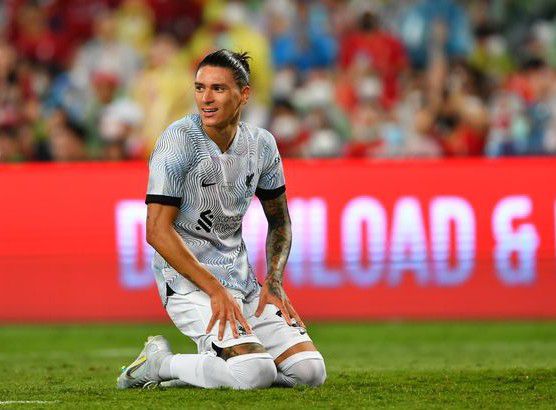 Jurgen Klopp and his coaching staff have been described as ‘more than satisfied’ with Darwin Nunez’s start to life at Liverpool.

The striker joined the Reds in a blockbuster €100m (£85.2m) transfer back in June – conveniently not long before before prolific forward Sadio Mane departed for Bayern Munich.

However, Nunez was unable to find the back of the net during Liverpool’s pre-season tour in Asia,

skying a very good opportunity in the 4-0 thumping by Man Utd in Bangkok and drawing a blank against Crystal Palace in Singapore – although he was only afforded an hour of action across both matches.

Aside from that glaring miss, which went viral,

Nunez did test the goalkeeper in his scant time on the pitch in both friendlies with good efforts from half-chances from the angle.

According to The Athletic, Liverpool boss Klopp and his staff are unconcerned by Nunez’s start in front of goal.

The report states that they ‘love’ the player’s ability to manoeuvre away from defenders and work space.

They also believe there are already signs of a potential connection with their attacking full-backs, who have been regular providers for the likes of Mohamed Salah and Mane in recent years.

Speaking on the player following the Palace friendly, Klopp said:

“I am not worried at all [about Nunez].

“The general judgement is 0.0 per cent interesting.

We all know it’s a joke, or a game for some people to pick out some situations where a player is not doing well.

“The only really important thing, first and foremost, is how I judge the situation for the player.

I couldn’t be more calm about it. I am completely convinced about his potential.”