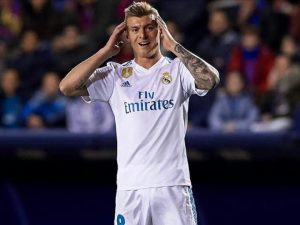 Los Blancos take on their eternal rivals on Wednesday, with the victor set to play the winner between Atletico Madrid and Athletic Club, who face off in Thursday’s other semi-final.

Kroos played a big part the last time Madrid won the Supercopa, back in 2020 and he is looking forward to the chance to lift the trophy for a third time, although he knows it will be no easy task.

Kroos at his press conference when asked about the difference in Xavi’s team to Ronald Koeman’s.

“I’ve not watched many Barcelona games lately, I have other things to do and watch our games.”

“But I know them well, they have some doubts but overall have a lot of high-quality people.

“I can’t say though what has changed under Xavi.”

The German also spoke about playing styles and admitted he favours a possession-based game.

“Those who know me well know I always want to have the ball, but the key to a good team is adapting to different necessities,”

“If you have pace up top, you have to make the most of that. It can be a way to control, but I always prefer to have the ball.

You have to look for the gaps, but possession on its own isn’t enough.”

Kroos comes into the competition in good form and he believes Los Blancos have improved as the season has gone on,

even though results were impressive at the beginning of the campaign.

“At the start of the season we won a lot of games without playing well,”

“Now we have improved and we’ve done very well in tough games.

There are no prizes handed out in January, except the Supercopa.

“So we have to keep going because there’s a team close to us in LaLiga Santander and if you slip up they’ll be there and if we think it’s all wrapped up we’ll be in trouble.”

Kroos is no stranger to winning titles with Real Madrid, but for some players, such as David Alaba,

it will be a first chance for success at the club and Kroos has been impressed with the Austrian so far.

“At Bayern he played full back and it’s very different playing centre back.

He played there sometimes and now he’s going it at Real Madrid and it’s a very different position,” said Kroos.

“He hasn’t surprised me because I know all about his quality on the pitch and off it he’s a good guy.

Real Madrid take on Barcelona at the King Fahd International Stadium in Saudi Arabia in the Supercopa de Espana semi-final at 20:00 (CET) on Wednesday.