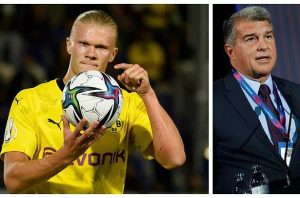 Barcelona president Joan Laporta believes his club will be in the hunt for Erling Haaland this summer, as he has made the Borussia Dortmund striker his top transfer target.

It may come to the surprise of many, but Laporta insists that the Blaugrana will have the money necessary to make a play for the Norway international in the next transfer window.

Laporta is believed to have told colleagues behind closed doors.

If we take him at his word that Barcelona have the economic side of things covered,

then the next question surrounds whether the Catalans can present the best sporting project in order to convince the 21-year-old that the Camp Nou would be the best place for him to continue his career.

That is something Laporta has already been working on and has spoken to Haaland’s agent, Mino Raiola, with whom he has an excellent relationship, and his father about.

There are many facets to Laporta’s plan to persuade Haaland, and one of them is that he would be the team’s major star and they would build around him.

The 21-year-old would, though, be surrounded by other quality young players;

not only the likes of Ansu Fati, Pedri and Ferran Torres, but other signings that Laporta hopes to make in the future.

Barcelona are planning optimistically for the future and they hope that Haaland will buy into that and want to be a part of it.

But he would likely be less of a star, both in sporting and non-sporting senses, at Los Blancos in a squad with more big names and possibly Kylian Mbappe to come as well.

Few clubs can afford to dream of signing Haaland, but along with Barcelona and Real Madrid, Manchester City are perhaps the main contenders, given their financial muscle.

Manchester United and Paris Saint-Germain are keeping tabs on the situation as well,

but have to think about Financial Fair Play, while Bayern Munich appear to have thrown in the towel.