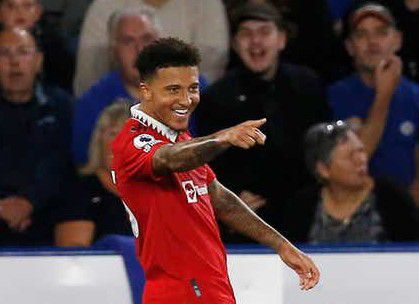 Manchester United made it three wins in a row to help put their woeful start to the season behind them as they beat Leicester 1-0 at the King Power.

As in recent wins over Southampton and Liverpool, moments of real quality on the break from United were largely swamped by passive periods where they offered very little and were left hanging on to a narrow lead.

Jadon Sancho put the visitors in front in the first-half, capitalising on some dreadful Leicester defending as the Foxes put in a showing worthy of their position at the bottom of the Premier League table.

They improved after the break, without every really looking like scoring as the equaliser did not come, as United moved up to fifth ahead of a real test against table-toppers Arsenal at Old Trafford on Sunday.

United threatened to double their lead before the break, Sancho having a shot blocked and Rashford regularly finding space in between Leicester’s defence and midfield. Even the boos from the home fans that met the half-time whistle lacked energy, summing up a lethargic showing from the hosts.

Ronaldo and Casemiro were introduced by Ten Hag, the United boss keen to bring some control and ruthlessness and to proceedings. Those changes had the desired impact, with Leicester’s momentum wrestled away.

The visitors had chances to double their advantage, Jonny Evans producing a brilliant piece of defending to prevent Christian Eriksen having a tap-in before Ronaldo’s acrobatic effort bounced just wide.

There was no need for a second goal for United though, as for the third match in a row they did just about enough to get the job done. Focus now turns to this weekend’s clash against Arsenal, a match that will reveal plenty about where both sides are.