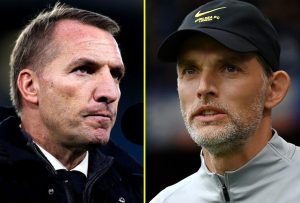 Chelsea return to Premier League action this weekend when they travel to take on Leicester City.

The Blues have enjoyed a largely excellent start to the season and find themselves at the top of the Premier League by winning eight of their 11 matches so far.

However, after stumbling to a 1-1 draw with Burnley last time out, the focus for Thomas Tuchel’s side will be on getting back to winning ways.

For the Foxes there’s a real need to pick up a positive result as Brendan Rodgers’ side currently sit in 12th position in the table going into the weekend.

It’ll be a fierce contest between two strong teams and one that you won’t want to miss.

The Premier League clash is set to take place at the King Power Stadium, Leicester on Saturday, November 20.

Kick-off is scheduled for 12.30pm with the contest being the first top flight match of the weekend.

Youri Tielemans is a doubt for the Chelsea clash.

The Belgian midfielder is struggling with a calf problem and as a result could miss Saturday’s clash.

Leicester will also be without Wesley Fofana, Mark Albrighton and James Justin who are still ruled out.

Chelsea could welcome Romelu Lukaku and Timo Werner back into the first team squad with both players progressing well in their recovery over the international break – and the former even re-joined training on Tuesday.

Kai Havertz, Mason Mount and Marcos Alonso are also expected to be back in contention, but the game could come too soon for Mateo Kovacic who is out with a thigh injury.