The duo, who were teammates at Barcelona and are both icons at the Camp Nou, were reunited in a beautiful moment in Paris.

Back in May 2005, the Brazil legend introduced the world to the Argentine sensation.

Who has gone on to win SIX Ballons d’Or, assisting the first of his 474 LaLiga goals. 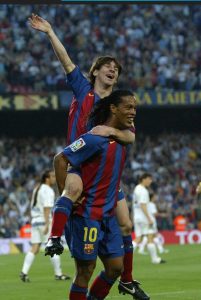 At the end of his Barca career, Ronaldinho handed over the baton to the wonderkid.

Having helped mentor him in Barcelona and in 2008 Messi took on the famous No.10 shirt and made it his own.

The pair are firm friends and dovetailed sensationally when they played together in Spain.

Lionel Messi even credits Ronaldinho with helping take Barcelona back to the top of European football, thanks to his stunning skills and carefree style.

“Ronaldinho was responsible for the change in Barca.

It was a bad time and the change that came about with his arrival was amazing.”

“In the first year, he didn’t win anything but people fell in love with him.

“Then the trophies started coming and he made all those people happy.

Barca should always be grateful for everything he did.”

And the foundations he laid down allowed Messi to flourish in Catalonia. 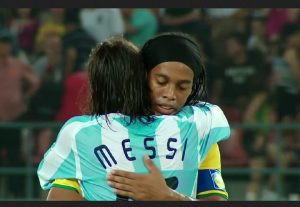 So it was no wonder that when Ronaldinho turned up in Paris that he would share a moment with Messi.

The Brazilian was interviewed in front of Paris Saint-Germain fans, who worshipped him for two seasons between 2001-2003.

And, ahead of kick-off, he was able to give his pal a big hug, with the Argentine giving his back a good rub too. A lovely moment. 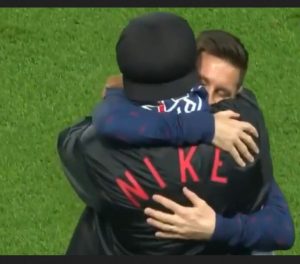 And while Messi hasn’t had the greatest start to life in France.

He hit a brilliant brace, including a Panenka penalty, to give his new club a 3-2 comeback win over RB Leipzig.

Kylian Mbappe had given PSG an early lead but goals either side of half-time from Andre Silva and Nordi Mukiele put the Germans ahead. 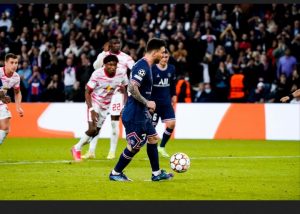 First a turnover in midfield set Mbappe free and his cut-back allowed the Argentine to level.

But with 16 minutes to go the Frenchman was fouled in the area and Messi, the coolest man in the stadium, neatly dinked home the winner from 12 yards.