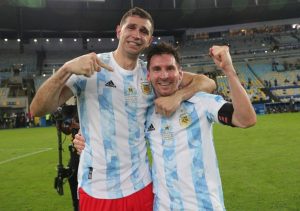 The Aston Villa goalkeeper has established himself as the number one goalkeeper for Argentina after years of uncertainty in net.

Having now made 11 caps for his country after impressing against Uruguay on Sunday evening.

He was imperious in goal, twice saving from Luis Suarez and earning a clean sheet.

As La Albiceleste as they stamped their authority on second place in their World Cup qualifying group with a 3-0 victory.

Messi, Rodrigo De Paul and Lautaro Martinez found the net – and the PSG superstar hailed his teammate for his brilliant display.

“When they come to him, he always responds. 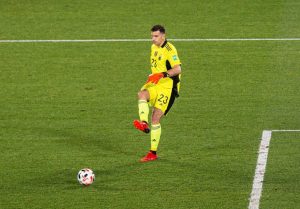 “He established himself in goal and we have one of the best goalkeepers in the world.”

Eyebrows were raised when Arsenal allowed Martinez to leave for Villa for a £20million fee last year.

The goalkeeper had spent a decade at the Emirates and just started to prove his worth before he was flogged to the Midlands club.

Mikel Arteta revealed that the strapped-for-cash Gunners simply had to sell him with the more fresh-faced Bernd Leno seen as the long-term number one between the sticks.

Martinez, however, arguably proved he is the better goalkeeper last season.

He threw shade at his former club last year by saying he believed his move to Villa was a step up, rather than down. 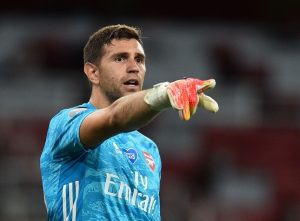 “When I decided to come to Villa it was because I trusted the manager and the club’s ambitions, and I knew how big Villa are.

“Some people do not realise how big Aston Villa are.

I said on day one my ambition is to be in Europe with Aston Villa.

“I want to take this club as high as possible and we are on the right path.

Can it be done this season? Yes. But we have to work for it.”