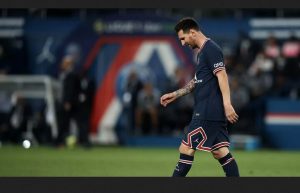 The Argentina forward has again been ruled out with injury for Paris Saint-Germain as they host Montpellier in Ligue 1.

He will once more be absent just days before a potentially crucial Champions League clash with Manchester City.

Former Barcelona Star was taken off by Mauricio Pochettino during last weekend’s win over Lyon.

“Lionel Messi started running again today in line with his treatment plan,” said PSG in announcing Messi‘s absence from the squad for the game against Montpellier.

A further check is scheduled for Sunday.

Marco Verratti will also miss the encounter and will begin training with the squad next week.

While Sergio Ramos is nearing a debut after his summer move from Real Madrid.

Messi is yet to score for his new club after leaving a financially-stricken Barcelona this summer.

Bringing to a close a more than 20-year association with the Catalan club.