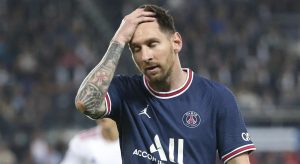 Lionel Messi will miss PSG’s away game at Metz after picking up a knock to his left knee The club have confirmed.

A further update regarding his fitness will be released in the next 48 hours.

PSG host Montpellier on Saturday before they face Manchester City in the Champions League on September 28.

Messi was substituted by manager Mauricio Pochettino in the 76th minute during his home debut against Lyon on Sunday.

Pochettino defended his decision after the match.

Read Also: Mario Balotelli Pointed His Head As He Celebrates In Front Of The Besiktas Coach Who Said He Had ‘No Brain’

“Sometimes it pleases people, or it doesn’t. I asked him how he was, and he said he was fine.”

Messi is yet to score so far in his three PSG appearances.

PSG currently sit top of the Ligue 1 table on 18 points after six matches.

Five points ahead of second-placed Marseille.

Marco Verratti is back in training while Sergio Ramos – who is still yet to make his PSG debut after moving from Real Madrid in the summer on a free transfer – is training individually as he steps up his recovery.