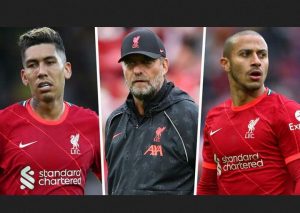 Liverpool are only make one senior signing during the summer, the Reds depend on their existing squad to improve this season.

It may have been a quiet summer at Liverpool in terms of transfers,

but, it has been a solid start to the season for Jurgen Klopp’s team,

With two wins and a draw from their opening three Premier League fixtures,

the 2019-20 champions return to action on Sunday, with what looks a mouth-watering clash,

For Klopp, it will be nice to talk about football again.

August, after all, was dominated by conversations about his club’s business,

and whether his squad had been sufficiently strengthened ahead of the new campaign.

Here are the players Klopp will be keen to see step up and perform this season.

If there is one word to sum up Thiago Alcantara’s first year on Merseyside, then ‘frustration’ should just about cover it.

Signed amid much excitement last September, the Spain star has only been,

able to show flashes of the class and quality which made him one of the world’s premier midfielders at Bayern Munich.

Illness and injury curtailed the first half of last season for the 30-year-old,

who was able to start only one game before January.

By the time Thiago was back up to speed, Liverpool were in freefall,

short of centre-backs and confidence, and tumbling down the table at an alarming pace.

That they were able to salvage their season as they did says much about the collective will,

and character of Klopp’s team, but also about the way in which big players stepped up in the final weeks of the season.

Thiago, most certainly, was one.

He started all of Liverpool’s final 10 Premier League matches, in which they recorded eight wins and two draws,

and, by the end of the campaign was looking every inch the star signing we had all expected.

He has not started any of Liverpool’s first three games,

and was left out of the Spain squad for this round of World Cup qualifiers.

That may prove a blessing in disguise for his club.

Klopp will be desperate to get Thiago firing, and into his side.

If, and indeed when, that happens, Liverpool should be all the better for it.

One thing you should never do is doubt Roberto Firmino’s importance to Liverpool.

even if the form and freshness of Diogo Jota means he has serious competition for the first time in years.

Firmino picked up a hamstring strain in the Reds’ draw with Chelsea prior to the international break,

but, the indications are that it is not too serious, and he is expected back in action later this month.

Klopp insists he will never judge his No.9 on goals alone, but last season’s total of nine,

in all competitions was his lowest since joining from Hoffenheim in 2015 – and he was a virtual ever-present, too.

There have been signs of recovery.

Firmino scored twice in a crucial win at Manchester United at the back-end of the campaign,

and opened this season with a goal off the bench at Norwich City, following a sparkling display,

against Osasuna in the Reds’ final pre-season friendly at Anfield.

The return of fans to stadiums, it is hoped, will get the 29-year-old flashing that megawatt smile more often.

Klopp will certainly hope so.

He knows he can rely on Mohamed Salah for match-winning contributions,

but how he would love to have Firmino back to his best this season as well.

If he gets his wish, Liverpool will be flying.

The Guinea midfielder has had a good start to the season – despite being left out in,

favour of Harvey Elliott against Chelsea – and is being talked up by those inside Anfield,

as a potential game-changer, should he remain fit and healthy.

Like Thiago, we have seen only glimpses of Keita’s full capability at Liverpool.

But like Thiago, Klopp believes he has a midfielder of rare talent, one who at his best,

will be able to take the Reds up a level in terms of control and creativity in the centre of the park.

Having lost Gini Wijnaldum, their most consistent and available midfielder,

and having surprisingly opted against signing a direct replacement,

Liverpool need others to fill the void in the centre of the park.

With less than two years left on his contract, now would be as good a time as any,

for Keita to turn those glimpses into something more substantial.

It is clear from the opening weeks of the season that Harvey Elliott is going to have a,

big role to play for Liverpool, both now and in the future.

The teenager has started two of the Reds’ first three games, and certainly has not,

looked out of place on the right of Klopp’s midfield three.

He was preferred to Thiago, Keita and Alex Oxlade-Chamberlain against Chelsea,

and looks to have nudged another gifted youngster, Curtis Jones, down the pecking order at present.

We should be careful not to place too much pressure on the shoulders of one so young,

but everything we have seen from Elliott recently suggests he is the real deal.

This could well be the season he confirms that.

The Japan international is, according to Klopp, “in incredible shape” right now,

but we are yet to see him this season.

Training ground excellence is one thing, but the 26-year-old is still to make his presence felt for Liverpool on a matchday.

Having spent the second half of last season on loan at Southampton,

and having heard the calls for Liverpool to sign an attacker this summer,

Minamino knows he has work to do if he is to convince his Anfield doubters.

He was seen as a perfect signing when arriving from Red Bull Salzburg in January 2020,

but he has started only 12 games for Liverpool since, and only four in the Premier League.

Liverpool resisted the temptation to cash in this summer.

Though, whether they would have had many takers is debatable – but it is hard to see how,

and where, Minamino fits into their plans going forward.

He does not look suited to playing wide, and he lacks the physicality to play as a No.9.

He shone as a No.10/second striker at Salzburg but, as we have seen, Klopp rarely veers from his trusted 4-3-3 formation.

“It is really hard to leave him out at the moment,”

the Reds boss said recently. We will see in the coming weeks and months whether anything changes.