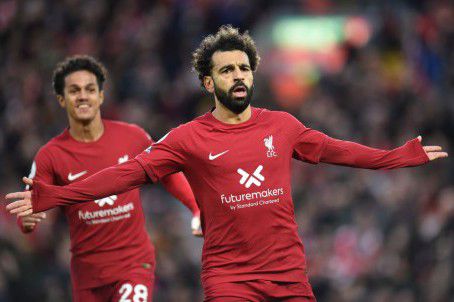 Liverpool have released a statement disregard ‘vile chanting’ and vandalism at Anfield following the 1-0 win over Manchester City.

At 76min Mohamed Salah’s strikes wad the difference in an ill-tempered second-half on Merseyside that saw Jurgen Klopp sent to the stands and Pep Guardiola targeted with coins thrown from the crowd.

On the chants from the City fans in the away end, a Liverpool spokesperson said:

‘We are deeply disappointed to hear vile chants relating to football stadium tragedies from the away section during today’s game at Anfield.

‘The concourse in the away section was also vandalised with graffiti of a similar nature.

‘We know the impact such behaviour has on the families, survivors and all those associated with such disasters.

‘We are working with the relevant authorities in order to do our utmost to ensure these chants are eradicated from football altogether.’

Prior to Salah’s opener, City thought they had taken the lead through Phil Foden before it was chalked off with Erling Haaland judged to have pulled back Fabinho in the build-up.

Guardiola claimed he had objects thrown at him in the aftermath of the disallowed goal.

Speaking to BBC Radio 5 Live after the game, Guardiola said:

‘The crowd tried [to throw coins/objects] but they didn’t touch me. Maybe next time they will be better.’

On the decision to rule out Foden’s goal, he continued:

‘So they disallowed because we scored a goal, otherwise it would not have been disallowed.’

Guardiola also aimed a dig at the match officials as continued to protest the decision to rule out the goal in a post-match interview with Sky Sports.

‘The referee decided before the game to go to Jurgen Klopp and my assistant coaches and say,

“Here it’s play on, play on, I’m not going to whistle any fouls”.

But after we score a goal it’s not play on. So, okay.

‘He decided to [let things go], we challenged, they shouted, we had to shout more,

they ran, we had to run more – but after we scored a goal they disallowed it so… this is Anfield.’