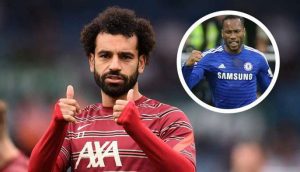 after netting his 100th Premier League goal in their 3-0 win over Leeds United on Sunday.

He scored 104 goals during his two spells at Stamford Bridge.

Salah opened the scoring for Liverpool at Elland Road following an assist from Trent Alexander-Arnold in the 20th minute.

He became the 30th player to hit the century mark and the fifth-fastest player to achieve the feat in 162 games.

during his stint at Chelsea and he has 98 league goals to his name so far in Jurgen Klopp’s team.

Read Also: ‘No More Sliding On My Knees!’ Romelu Lukaku Vows To Stop The Jubilation Style

“Mo’s record is crazy,” He is still hungry and I don’t know how many records he can break.

“Since he joined us he has been the perfect player – a top-class player.”

After Drogba and Salah, former Arsenal and Tottenham Hotspur striker Emmanuel Adebayor follows in the third spot with 97 goals.

tally with his 97th Premier League goal, to go level with Adebayor.

The Senegal international grabbed a stoppage-time goal after attempting 10 shots in the encounter to seal Liverpool’s 3-0 win.