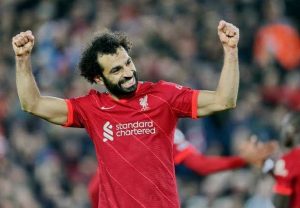 Aston Villa manager Steven Gerrard made a losing return to Anfield as Liverpool continued their pursuit of Premier League leaders Manchester City with a hard-earned victory.

Former Liverpool captain Gerrard was, predictably, given a rapturous reception after playing 710 games and scoring 186 goals for the club while winning the Champions League, FA Cup, Uefa Cup and League Cup.

Gerrard’s response to the adulation was low-key as his Villa side, who had won three of his first four games in charge since arriving from Rangers, set about making life difficult for Liverpool and frustrating the Kop.

Villa achieved their aim, aided by fine saves from keeper Emi Martinez, until they were finally undone in the 67th minute when Tyrone Mings bundled Mohamed Salah to the ground, the Egyptian scoring the spot-kick in emphatic fashion, the win leaving Liverpool in second place a point behind Manchester City.

Substitute Danny Ings almost took advantage of a late mix-up between Liverpool keeper Alisson and Joel Matip which left Villa fans demanding a penalty in vain, but Jurgen Klopp’s side closed out the win.