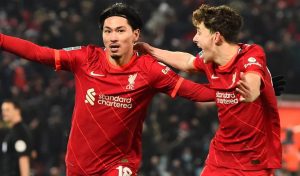 Liverpool beat Leicester 5-4 on penalties in an epic Carabao Cup quarter-final after Takumi Minamino struck a last-gasp equaliser to make it 3-3 at full-time.

Jamie Vardy scored twice in the opening 13 minutes to give the Foxes a lead and then, after Alex Oxlade-Chamberlain fired in a goal for the hosts, James Maddison hammered home from 25 yards just after the half-hour mark.

Vardy was inches away from putting the game beyond doubt and completing a hat-trick before the interval when he hit the post with stand-in goalkeeper Caoimhin Kelleher beaten.

Diogo Jota came on at half time for the largely second string Reds outfit and scored to reduce the deficit to one.

The game went straight to a penalty shoot-out and it was Luke Thomas who missed Leicester’s fourth penalty which looked decisive, but Minamino smashed Liverpool’s fifth against the crossbar.

However, Ryan Bertrand then missed his spot-kick, paving the way for Jota to slot home and sent Liverpool to the semi-finals.