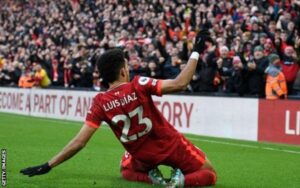 Liverpool staged a second-half comeback against a resilient Norwich side to keep their Premier League title hopes alive with an eighth successive win in all competitions.

emergency action moments after the interval when Milot Rashica’s deflected strike gave the Canaries hope of a first win at Anfield in 28 years.

Liverpool boss Jurgen Klopp, who made seven changes to the side that won at Inter Milan in the Champions League in midweek,

intervened to make attacking changes on 62 minutes and within four minutes his side had turned the game around.

Mohamed Salah raced on to a clearance from goalkeeper Alisson Becker to round Angus Gunn and score.

– and Luis Diaz added his first since joining from Porto with a neat, chipped finish to seal the win.

Klopp’s side move to within six points of league leaders Manchester City before the champions’ late game, while Norwich drop to bottom place and are five points from safety.