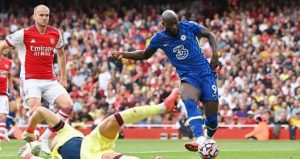 The Chelsea new signing says his goal for Chelsea against Arsenal on Sunday is the most special Premier League goal he’s ever scored.

The striker swept in from full-back Reece James’ cross to kickstart the Blues’ 2-0 victory,

in his first start since rejoining the club from Inter. While the finish was straightforward,

he did well to hold up the ball in the build-up before making a darting run beyond Gunners goalkeeper Bernd Leno.

though none in the 10 domestic appearances he made during his first stint at Stamford Bridge.

“Yes, that one was the best [Premier League goal] for me,”

“You guys know how emotional it was today.This one is the best of the lot.

Obviously, it was only a tap-in but the build up was nice so for me this one was the best.

“It took five minutes or so to understand the movements of my team-mates but I asked a lot of questions.

To be honest, this group is very, very talented and hungry.

“It was easy for me to fit in because I played this way with the Belgian national team.

The coach prepared us well and we came in with confidence and got a good result.”

“I am very happy with how he has integrated already, a very smart guy who likes to be in the group,”

“He is very democratic leader, talks to everyone, friendly and is totally competitive.

He gives us something we did not have, to protect balls.

You cannot start better than a goal and he assisted some chances.

“I didn’t expect too much but I wanted to see his capability to adapt and to link up,

that is what he did very good and the guys like to play with each other.”

The £98 million ($136m) transfer fee it took for Chelsea to land Lukaku will add pressure on the striker to provide immediate goalscoring results – an expectation team-mate Timo Werner struggled with last year when he joined the Blues.

Lukaku’s quick goal could alleviate some of that stress, and the team’s perfect start to the campaign won’t hurt either.