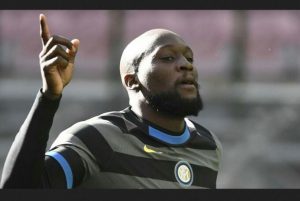 Romelu Lukaku has said his final goodbyes to Nerazzurri supporters on social media after sealing a return to Stamford Bridge.

Lukaku joined Inter from Manchester United for £74m ($103m) in the summer of 2019 and went on to enhance his reputation as one of the most deadly strikers in Europe at San Siro.

The 28-year-old also helped the Nerazzurri bring their 11-year wait for a Serie A title to an end, but ultimately decided against seeing out his contract through to 2024 after receiving word of interest from Chelsea.

The Belgium international has taken to social media to say his final goodbyes to Nerazzurri supporters while reflecting on a “beautiful” two-year chapter in Italy, but has also admitted that he is fulfilling a long-held dream by returning to Stamford Bridge.

READ ALSO: My Ankle Injury Is A Thing Of The Past. Says Eden Hazard

‘Ronaldo would be dying to be here’ – Di Maria says

“Thank you for the unconditional support and love on a daily basis. Thank you for motivating me even more after the first season. When I came to Inter, I immediately felt that I would do well for this club.

“The live and reception that I first received at Malpensa airport was the start of a beautiful story. I made it my mission to never let you down every time I wore the Inter shirt.

“I gave 100 per cent in every training session and every game so that I could make you proud. Our first season ended in the toughest possible way, but you guys gave me the strength to continue to keep pushing and we did as a team.

“That’s why we became champions together. I hope you guys understand my decision to move on to Chelsea. It’s the chance of a lifetime for me and I think at this time of my career it is a chance I always dreamed of.

READ ALSO: Salah Sets Yet Another Record For The Season-Opening Goal For Liverpool

“One thing is for sure and that is that I will always remain an Interisa, because without you I wouldn’t be the player or man that I am today.

“Thank you from the bottom of my heart. Romelu.”

The impact of Romelu Lukaku at Inter Milan

Lukaku instantly nailed down a role in Antonio Conte’s starting XI upon his arrival at San Siro, and scored 34 goals in 51 appearances to help Inter finish second in Serie A and reach the Europa League final in his first season with the club.

The former United striker added another 30 to his tally in 2020-21, including 24 in Serie A as the Nerazzurri stormed to the Scudetto, with only Juventus talisman Cristiano Ronaldo scoring more (29) in the league.

Lukaku in Chelsea’s team will be a great addition for Thomas Tuchel’s tactic.