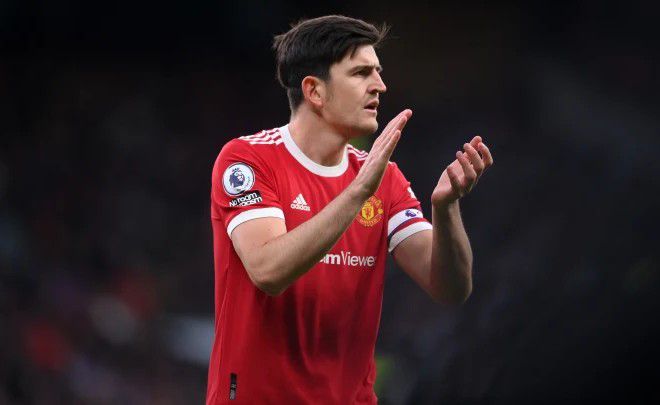 The England Defender Harry Maguire has insisted his side  Manchester United are only focused solely on their own top-four hopes and not on hurting Liverpool’s quest to win the quadruple.

on points with fourth-placed Tottenham with a win against Liverpool on Tuesday evening, albeit having played one game more than Antonio Conte’s side.

Not only would the win be enormous for United’s European chances,

it would also be a huge blow to Liverpool’s hopes of catching Manchester City at the top of the table.

Despite the obvious appeal of that for a United player, Maguire told Sky Sports that

the Red Devils are not paying any attention to what other clubs are doing and are only interested in what they can do to help themselves.

“I don’t think that’s part of our motivation [stopping Liverpool’s quadruple bid], to be honest.”

“I think the motivation is going to Anfield, playing against Liverpool and winning a football match and getting three points for this club and the fans.

“The fans have stuck with us throughout this season, they turn up in their numbers wherever they go, they’ve been amazing in such a difficult season.

“For us to go to Anfield, perform well and get the three points,

it would be a huge moment for us to give to the fans. So I think that’s the big motivation for us.”

However, Maguire did confess that United are looking for a bit of revenge after they were thumped 5-0 by Jurgen Klopp’s side at Old Trafford earlier this season.

“Yeah for sure, like you say that was such a low point, the lowest point of the season,

one of the lowest points of my career, and I’m sure the rest of the lads, without international football involved in that.

“You don’t need motivation to play in these games.

It’s such a big rivalry, when you join this club you know the rivalry, it’s one of the biggest in the world.

“It’s a game we’ve got to look forward to.

We know we’re going to have to play at our best to get something, and that’s what we’ve got to prepare for.”