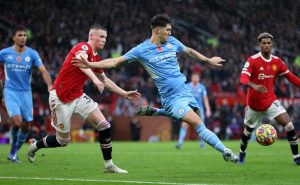 Manchester City’s revenues overtook those of local rivals Manchester United last season for the first time ever, according to new figures.

The Citizens have become the dominant force in England in recent years.

Pep Guardiola’s arrival as manager has helped accelerate their progression on the field, while the club’s officials have secured deals to increase cash flow off it.

According to newly released figures from KPMG, winning England’s top flight title and reaching the final of the Champions League saw City’s operating revenues rise to €644m during the 2020/21 season, an increase of 17% year on year.

Man United, meanwhile, generated only €557m during the same period.

The Red Devils have historically been the Premier League’s richest club by revenues,

though their regression in on-field success has hampered them in recent years.

Read Also: Patrice Evra: There Are At Least Two Gay Players At Each Football Club

“We are proud of the strength and resilience which our club has shown through the pandemic.

Despite the significant loss of revenues from normal levels while matches were being played behind closed doors.

Our commercial business remains industry-leading, as demonstrated by the series of new globally-recognised third party partnerships and renewals announced over the past year.”

Though the global pandemic has distorted the look of football finances more broadly.

Man City have signed a number of partnerships, including with Masdar, Etihad Airlines, Etisalat and Puma.

Manchester United could reclaim some of their lost revenue now that matches are back in full capacity stadiums.

Clubs lost out on cash while games were being played behind closed doors.

Man United did, however, sign a lucrative deal with new shirt sponsor TeamViewer and frequently pen new and renew former agreements with sponsors.