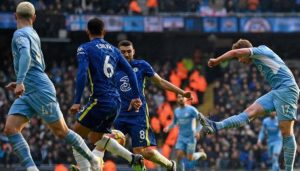 The former Chelsea player broke the deadlock in a tight game with a superb curling drive past keeper Kepa Arrizabalaga with 20 minutes left to extend City’s lead at the top of the table to an imposing 13 points.

Chelsea had their chances, the best coming when Ederson saved from Romelu Lukaku in the second half,

but De Bruyne made the difference and City now also have a 14-point advantage over Liverpool, who have two games in hand.

Man City deserved the win for their greater urgency and possession.

Kepa keeping out Jack Grealish with a first-half save, and this represents another significant stride in their quest to retain the Premier League crown.