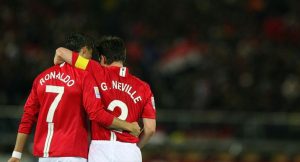 Man Utd have agreed a deal to bring Cristiano Ronaldo back to Old Trafford,from Juventus;

will give supporters hope of a great season ahead.

United have agreed to re-sign the Portuguese forward from Juventus on a two-year deal and Neville says Ronaldo,

who won three Premier League titles and the Champions League when he was first at the club,

can give Ole Gunnar Solskjaer’s side the boost they need to compete with the likes of Manchester City, Chelsea and Liverpool for major honours this season.

Ronaldo had seemed on course to go to rivals City earlier in the day on Friday but in a dramatic twist, he is now on course to return to Old Trafford.

“It’s a little bit nostalgic, which doesn’t always work in football, but the idea of Ronaldo going to Manchester City was torture for United fans.

“If there is a big player available, United have to be in the market.

We know there’s a potential that Erling Haaland could be available next summer,

Edinson Cavani’s probably got a year, they definitely need a centre-forward option with Cavani.

“I know they’ve got Mason Greenwood but if you look at the business Chelsea have done,

that Manchester City were looking to do, Manchester United had to compete, and what they’ve done is bolster the squad with a proven goalscorer, a club legend, and it’s going to give them an incredible 12 months.

“Ronaldo will be coming to win trophies, personal accolades, set the Premier League on fire. It is a different Ronaldo, everyone expected that.