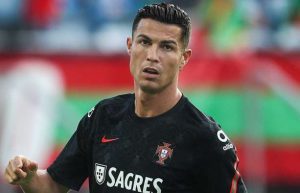 Cristiano Ronaldo has been granted an early release from international duty, Portugal confirmed on Thursday.

The striker, 36, is yet to feature for the Red Devils after moving back from Juventus for a second spell at Old Trafford last week.

But he will now have extra time to prepare for his return to the Premier League due to the yellow card he picked up against Ireland.

“Cristiano Ronaldo was excused from his stay with the national team on Thursday,”

the Portuguese Football Federation explained in a statement.

Read Also: ‘I Have Had A Perfect Start’: Grealish Admits He Needs To Change Games Like Kevin de Bruyne

• ‘He’s Good, So To Speak’: Haaland Reaveals What He Did To Van Dijk’s During Norway vs Netherlands

• Ronaldo Walks Out Of Post-Match Interview

“The yellow card he saw against Ireland, as it was the second in this qualifying phase,

forces him to serve a one-match suspension, which will take place against Azerbaijan.

“This morning, the national team captain formed part of the group of players who carried out regenerative exercises in the hotel.”

picking up a yellow for removing his shirt and ruling himself out of contention for Tuesday’s visit to Azerbaijan.

The upshot, of course, is that Ronaldo will have more than a week to prepare for his,

second United ‘debut’, with the Reds returning to action in the Premier League on September 11 against Newcastle United.