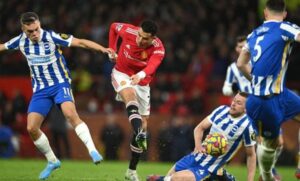 Bruno Fernandes added a second as United broke from deep inside their own half in the final minute of injury-time.

After a tepid opening period, Ronaldo struck six minutes into the second half.

The Portuguese collected Scott McTominay’s pass before edging right of the Brighton defence and, with barely any backlift, sent a low shot curling beyond a static Robert Sanchez.

Fernandes wasted a glorious chance when he failed to get past Sanchez with only the Brighton keeper to beat,

before Ronaldo nodded an excellent chance wide of the far post.

It meant United breathed a sigh of relief when Jakub Moder’s speculative effort from the corner of the box bounced back off the bar with David de Gea beaten.

Brighton were still trying to salvage something from the contest when Fernandes struck with virtually the final kick.