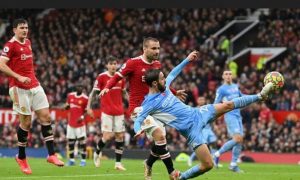 Manchester City put the pressure back on Manchester United’s struggling manager Ole Gunnar Solskjaer as they cruised to victory with almost embarrassing ease at Old Trafford.

City’s win may not have been as emphatic as Liverpool‘s magnificent 5-0 victory here in United‘s last home league game but the gulf between the sides was certainly as wide.

Solskjaer and United got off to the worst possible start when Eric Bailly turned JoaoCancelo‘s cross into his own net after seven minutes.

And it was only the brilliance of keeper David de Gea that somehow kept City at bay until the final seconds of the first half.

De Gea produced a string of brilliant saves, denying Cancelo twice as well as GabrielJesus and Kevin de Bruyne, plus even saving from his own defender VictorLindelof.

However, Bernardo Silva took advantage of awful defending from Harry Maguire and Luke Shaw to steal in on another Cancelo cross at the far post.

United‘s only response was a volley from the subdued Cristiano Ronaldo.

The second half was merely a formality as City moved down the gears but still looked more likely to score in what was another chastening afternoon for Manchester United and their manager.