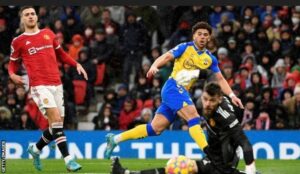 Manchester United had to settle for another 1-1 draw after being left frustrated by an impressive Southampton in the Premier League.

Ralf Rangnick’s men are getting used to that scoreline, which has now cropped up in three successive games – leading to a penalty shootout defeat by Middlesbrough in the FA Cup and a league draw at Burnley.

United had taken a first-half lead against the Saints – as they did against Burnley and Boro – but once again conceded a second-half equaliser and could not find a winning goal.

The hosts went ahead after 21 minutes as Marcus Rashford escaped in behind the Saints defence and played the ball off for Jadon Sancho to convert an easy finish.

Paul Pogba tapped home on the stroke of half-time but the goal was disallowed as Cristiano Ronaldo had strayed offside – and the Portuguese forward later had a header chalked off.

United were unable to press home their superiority and were made to pay at the start of the second half as Che Adams stayed onside to slot a finish into the far corner via the foot of the post.

Ralph Hasenhuttl’s men, humiliated 9-0 on their previous visit to Old Trafford last February, were on top for long periods thereafter and may have pulled off a victory.

On-loan Armando Broja saw a drive pushed away by David de Gea, who was kept busy, while Stuart Armstrong blazed wildly over from a promising position.

The draw meant United were unable to move into the top four, while Southampton stay in 10th place.