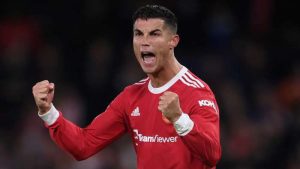 Former Juventus star  has equal Aguero for most Champions League winners after the 90th minute as 5 times Ballon d’or saved Manchester United in a win over Villarreal.

He pounced in the box to combine with Jesse Lingard to seal a 2-1 Man Utd win.

It came after Man Utd fell behind in the second half only for Alex Telles to equalise later on.

And it was Ronaldo that, once again, provided the game-changing moment when his side needed it most.

On a day where Ronaldo set the record for Champions League appearances.

He also moved level with Aguero when it comes to late winners.

With the goal, Ronaldo now has three game-winning goals in the Champions League after the 90th minute.

Putting him level with the former Manchester City and current Barcelona star.

After the match, Manchester United boss Ole Gunnar Solskjaer was full of praise for Ronaldo.

He always knows his team has a chance with Ronaldo on the field.

“That’s what happens here at Old Trafford,”  “We threw caution to the wind and we got lucky.

“They’re a hard team to play against. When you have Cristiano on the pitch there’s always a chance.

Cristiano is so good in front of goal.”

“He’s done that so many times,”

“and when you saw him [for Portugal] against Ireland a month ago,

he missed a penalty early, didn’t touch the ball more or less, and scored two great headers in the last minutes.

“That’s what he’s done throughout his career.

He stays in the game. I’ve seen him all day, the way he’s built up for this game.

And when he gets that one chance it’s a goal.

He had a couple of half-chances, but a true mark of a great finisher is that he keeps calm when the [big] chance arrives.”

Ronaldo reactions after the match.

Villarreal plays so good. They had many chances. We struggled a little.

We knew it before the game that we must win the game. It was tough.

“The team was a little nervous in the first half and second half to be honest.

We were a little bit lucky as well, which we didnt have last game but we had today.

“Great attitude from our players and the fans pushed us a lot.

This is what we need when the team is not playing well. An important win.”