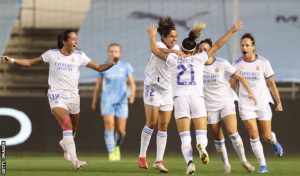 After a 1-1 first-leg draw in the second round qualifier, Real grabbed the winner on the stroke of half time when Claudia Zornoza drove in.

It was a little harsh on the hosts, who had been the better side until then.

Hayley Raso went closest to equalising in the second half, but her powerful strike hit the crossbar.

Moments earlier, City also had a great chance when a mistake in defence was,

pounced upon by substitute Ellen White, but her pass was just out of Caroline Weir’s reach with an open goal in front of her.

Supporters had turned out in good numbers on a warm evening at the Academy Stadium,

in Manchester, hoping to see some history being made.

The competition had undergone a revamp this season with a 16-team group stage for the first time and City,

quarter-finalists last season, were hoping to ensure they were one of the sides that would qualify for it.

But despite dominating possession Gareth Taylor’s side could not find a breakthrough,

as they failed to work the opposition goalkeeper enough, finishing the game with just a single shot on target.

They tried everything they could in the closing stages and White also had a header hacked off the line,

but Real Madrid’s defence held firm to ensure the Spanish side progressed to the group stage.