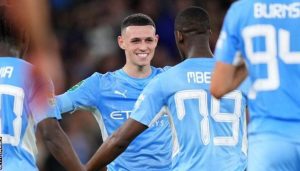 Mahrez claimed his double either side of half-time, with Phil Foden and Ferran Torres also beating veteran goalkeeper David Stockdale.

Substitute Cole Palmer, 19, added the sixth with his first goal for the club.

It was a massive night for City’s youngsters, with Pep Guardiola handing senior debuts,