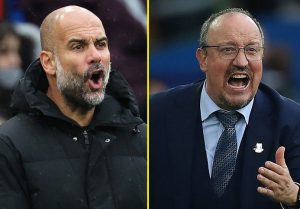 Manchester City will look to close the gap on Premier League leaders Chelsea when they host Everton this weekend.

Manager Pep Guardiola’s side leapfrogged Liverpool into second place behind the Blues following a 2-0 away to rivals United before the international break.

The Spaniard is yet to face Rafael Benitez since he became Everton boss but he does boast a dominant record over his compatriot.

Guardiola has won three of the four games he has faced the former Newcastle chief and will be keen to add to avoid any slip-ups.

The Premier League clash will take place on Sunday, November 21.

The match at the Etihad will kick off at 2pm.

City thumped Everton 5-0 during this fixture on the final game of last season which was Sergio Aguero’s final appearance for the club.

Bernardo Silva’s fitness is the key topic for the home side having admitted he played through the pain barrier on international duty with Portugal.

The 27-year-old could potentially miss out against Everton alongside Ferran Torres, who is still recovering from a foot problem.

The away side meanwhile have been plagued by injuries recently with Tom Davies the latest to suffer a knee problem during training.

Abdoulaye Doucoure and Dominic Calvert-Lewin are still in the treatment room dealing with ankle and thigh issues.

Mason Holgate is also suspended after picking up a red card against Tottenham but Yerry Mina is in contention to return.