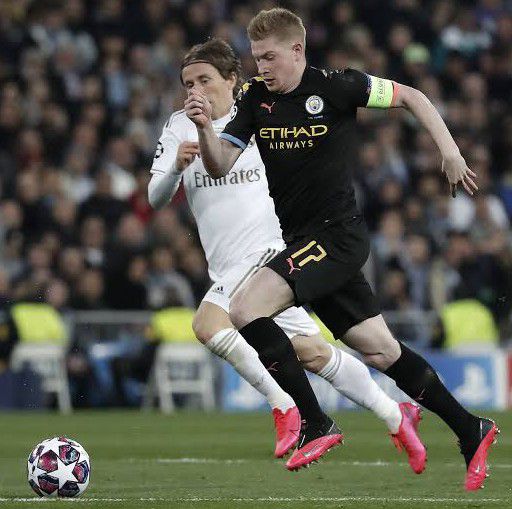 Manchester City are likely to be without both Kyle Walker and John Stones for tonight’s Champions League semi-final first-leg meeting with Real Madrid.

Right-back Walker has not played since the goalless draw with Atletico in Spain due to an ankle injury,

muscle tightness suffered in the win over Brighton three days before.

While Guardiola did hint that a final decision would be made closer to kick-off, the fact that

neither have been put through their paces ahead of such a huge game would suggest they are unlikely to feature.

Elsewhere, Joao Cancelo is suspended, meaning Guardiola will have to tinker if Walker is deemed unable to play.

Nathan Ake and Kevin De Bruyne both played through injuries against Watford, meanwhile.

“They are doubts, they didn’t train for the last week, ten days, John since Brighton.

We will see how they feel, and take a decision tomorrow,” Guardiola said of Walker and Stones at his press conference on Monday.

“We have a training session this afternoon at 4. We will see how they feel. We have time tonight and tomorrow morning to decide.

I have to see today’s session to decide.”

Guardiola did admit some of his players would have to get used to operating in positions they are not wholly comfortable in,

so perhaps we could see a fairly unusual-looking City lineup this evening.

The former Barcelona boss also paid respect to Madrid – once his biggest rivals as a player and manager – ahead of the heavyweight semi-final tie.

“Their history speaks for itself,” he said.

“We have the desire to compete against them. For us playing against them is an incredible test and we want to try it.

Suffer when we suffer, stick together. Try to do as best as possible.

“It would be the same against Bayern or Barcelona.

They are a team many times in this position. In the last decade we were almost never here and now we are, which is good.

Reaching the final will be a good lesson for us that’s for sure.”