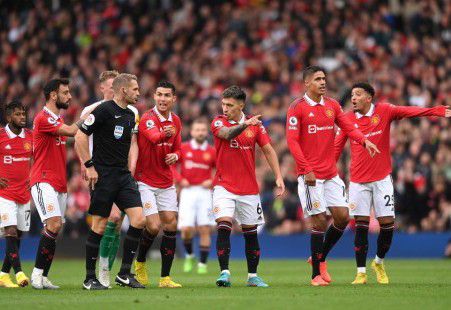 Manchester United have been charged by the Football Association over indiscipline of their players during last weekend’s draw against Newcastle.

decision to rule out what Cristiano Ronaldo thought was the opening goal of the contest.

The Red Devils have been found to be in breach of FA Rule E20.1 and the club now has until Thursday to respond to the charge.

Ronaldo thought he had registered his first Premier League goal of the season during the early stages of the second half at Old Trafford.

Newcastle appeared to take a free-kick deep inside their own half when Fabian Schar tapped the ball back to Nick Pope, apparently intending for the goalkeeper to take the set-piece.

The England international hesitated while deciding where to play the ball and that allowed Ronaldo to pounce.

‘The free-kick was slightly in the wrong place and obviously Fabby’s [Schar] rolled it back to me and walked off,’ Pope told Chronicle Live.

‘I think you know by everyone’s body language that you know he’s not meaning to take a free-kick.

‘I think the referee sorted it out quickly and fair play to him for making the right decision and squashed it straight away.’

‘I don’t have a comment, everyone has seen it.

‘I shared that with them [the officials]. Everyone has seen what happened today on the pitch.’

‘I could see it at the time, and for me it was clear Fabi [Schar] wasn’t taking the kick. He was allowing Nick to do it.

‘I don’t know if the ref had blown his whistle, but I don’t think he had to restart play.

For me, it was clear that Nick was waiting to actually deliver the free-kick and then, obviously, Ronaldo had taken the ball off him.

‘It would have been a very, very difficult goal to swallow if it had stood. For me it was clear the ball it wasn’t in play.’