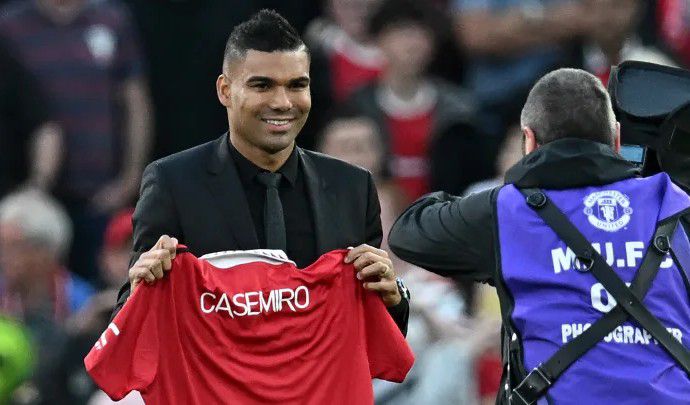 Manchester United have confirmed that new signing Casemiro will wear the number 18 shirt at Old Trafford.

The midfielder has worn 18 in the past, during his time in Real Madrid’s academy, but is more famous for wearing 14 during his illustrious seven-year spell in the first team at the Santiago Bernabeu.

However, 14 has just been taken by fellow new face Christian Eriksen, who chose the shirt

following Jesse Lingard’s departure on a free transfer, and now Casemiro has taken the 18 which was vacated after Bruno Fernandes‘ switch to 8.

Among the former wears of the 18 shirt are Ashley Young, Fraizer Campbell and, perhaps more notably, Paul Scholes, the latter of whom was given a shout-out by Casemiro during his presentation earlier this week.

“I think there are players that you remember in your life.”

“So, in terms of idols in this position my idol growing up was always [Zinedine] Zidane, [but] here at Manchester United, it was always Paul Scholes.

“He’s a player that was small but he got stuck in, he was a fighter, he gave everything on the pitch.

His passing over 50 to 70 metres was incredible.

Manchester United have always [had] good players in that position.

[Michael] Carrick was also a great player so I think that Manchester United have always had good players in that position and in midfield.

“The little guy [Scholes] was very good and what I loved about him when he played was that he was small but he went in hard and fair.”