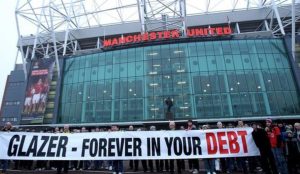 United notified the New York Stock Exchange of the sale on Tuesday evening, in the names of club directors Kevin Glazer and Edward Glazer.

The statement makes it clear the club “will not receive any proceeds from the sale”.

It comes five months after United’s Premier League game against Liverpool was postponed due to fan protests.

That followed the collapse of the European Super League project which saw United co-chairman Joel Glazer heavily involved in the negotiations.

In March, Avram Glazer sold £70m worth of shares in the club.

The sale represents 8% of the family’s total combined ownership.

Although they will still hold a combined 69% of the shares in United and sources say they remain committed to the club.

It is almost certain the shares will be sold at a price lower than the Stock Market value due to the sheer number being sold.

In the wake of the supporter unrest and pledged to make shares available to fans.

In September, he said implementing a share scheme was “rather complex”,

“we’re jumping those hurdles” and hoped to bring the initiative to a conclusion “in the not-too-distant future”.