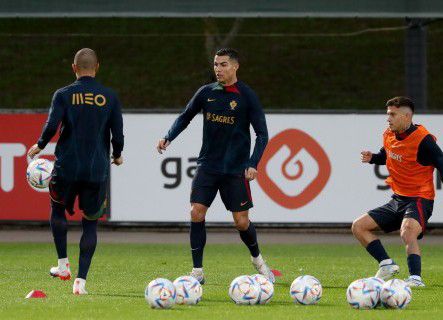 The Red devil’s have begun the process of sacking Cristiano Ronaldo and have told him not to return to the club after the World Cup.

hit out at Erik ten Hag, the Glazer family and the attitude of the club’s younger players.

Ronaldo was suspended by United last month after his refusal to come on as a substitute in the 2-0 win over Tottenham at Old Trafford, but was allowed to return to the squad by Ten Hag.

However, this week’s interview with TalkTV has now effectively ended Ronaldo’s second stint at United as the club are taking steps to cancel his contract.

Read Also: ‘I Felt Provoked By The Coach’_ Cristiano Ronaldo On Storming Down The Tunnel Early Against Tottenham.

According to MailOnline, United’s lawyers believe Ronaldo’s actions are enough to consider it a breach of his contract,

Should United successfully terminate Ronaldo’s deal without paying compensation, it would save the club in the region of £16 million.

Meanwhile, The Guardian report that Ronaldo has already been told by United to not return to

the club’s training ground after the end of Portugal’s World Cup campaign in Qatar.

It’s understood that Ten Hag has made it clear to United’s hierarchy that Ronaldo should never play for the club again.

Ronaldo, meanwhile, is currently with Portugal’s national team ahead of the start of their World Cup campaign in Qatar, which begins against Ghana next Thursday.

After the second part of Ronaldo’s extensive interview was broadcast on Thursday evening, United issued a statement on Friday which read:

‘We will not be making further comment until this process reaches its conclusion.’

Speaking about his relationship with Ten Hag, Ronaldo said:

‘I don’t know what’s going on. Since Sir Alex Ferguson left I have seen not evolution in the club. The progress was zero.’

‘For example, an interesting point is how a club like Manchester United sacked Ole, they bring in a sporting director Ralf Rangnick which is something nobody understands.

This guy is not even a coach.

‘A big club like Manchester United bringing in a sporting director surprised not only me but all the world.

‘Nothing changes. Not only the jacuzzi, the pool, even the gym. Even some points of technology, the kitchen, the chefs – who I appreciate, lovely people! They stop in time which surprised me a lot.

‘I thought I would see different things, technology, infrastructure.