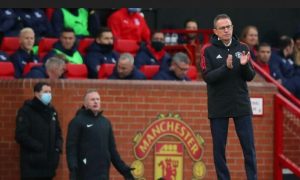 Manchester United made a winning start to life under interim boss Ralf Rangnick thanks to Fred’s 77th-minute winner.

A more energetic United display looked like going unrewarded against a dogged Crystal Palace outfit until Fred struck first-time from Mason Greenwood’s lay-off to send a superb 20-yard effort curling over Vicente Guaita and into the top corner.

It was only Fred’s second goal of the season – and the first time since the middle of September that United have recorded back-to-back league wins.

Until the Brazilian’s effort, Rangnick’s side created numerous decent chances, without really looking as though they were going to score and Guaita would probably have saved an Alex Telles free-kick that skimmed the bar had it been on target.

Indeed Palace, who were looking to win for a third successive season at Old Trafford, came close themselves when Jordan Ayew turned James Tomkins header across the face of goal and narrowly wide of the far post.

The victory meant that Rangnick emulated three of United’s other four new managers since Sir Alex Ferguson retired in 2013 by winning his first match at the helm, with Louis van Gaal the only man to fail.