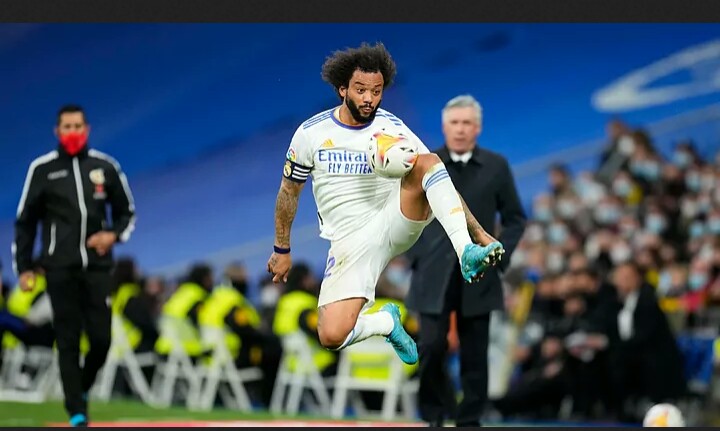 Marcelo contract coming to an end on June 30 of this year.

The Real Madrid left back is expected to be living out his final days as a Los Blancos player.

But having spent the majority of his playing career with the club, the 33-year-old dreams of hanging up his boots at the Estadio Santiago Bernabeu.

“I’m calm,” when asked about his future on the popular Spanish TV show ‘El Hormiguero’.

“This is my club. I have the idea of playing until my son grows up so that I can play with him, and I want to keep going at a high level.

“Now we have important matches. I’m the captain of the best team in the world. I’m calm and I feel protected.

“I’m not thinking too far ahead. Everything comes to an end. I’d like to retire here, but it’s not up to me to make the decision.”

Read Also: Antonio Conte Insists Mentality Of Tottenham Players Is Behind ‘Too Many Ups And Downs’

Marcelo is an important figure at the club, even if his importance on the pitch has faded in recent seasons.

His status as one of the captains, though, is unlikely to contribute to him signing a new deal.

“There are no privileges,” Marcelo said. “It gives me pride to be one of the captains, but there are three more.

The Brazilian joined the club as far back as 2007 and still remembers the day he signed for Real Madrid.

“I came with my agent, initially to get to know Valdebebas,” Marcelo remembered.

“My things were still in Fluminense. I told my girlfriend, travelled, saw [David] Beckham.

“Then they sent me to the Bernabeu and took me to a store to get a tailored suit… I’d never worn one in my life.

“Then when I arrived the contract was there and I didn’t think twice before signing it.

Fabio Capello asked if I wanted to stay until Christmas, but I was a little scared and I went back to Brazil.”